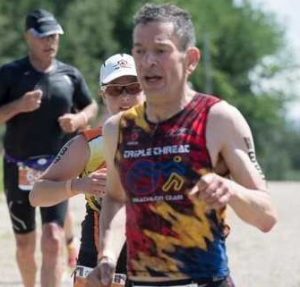 Coach Tom Okany has an NCCP Certification as a Triathlon Community Coach. His journey in triathlon began with his first triathlon in Montreal in 1994 and he has been active in the sport ever since. He has competed at every distance from Sprint to Ironman and has won his provincial age group catageory several times.
Tom joined Triple Threat in the mid 2000’s. As an experienced triathlete, many team members looked to him for training advice, so in 2017, Tom took the Triathlon Canada Level 1 coaching course and became Triple Threat’s coach  for the 2017/8 season. He has since completed his NCCP certification as a Triathlon Community Coach.

Tom doesn’t believe in shortcuts when it comes to training. That being said, training time is a very valuable commodity so efficient use of that time is important. The Triple Threat periodized annual training plan is built from a series of blocks or mesocycles starting at the end of the current year. The focus of each mesocycle changes as we approach the first triathlon of the year, normally in late June.

Tom’s basic philosophy is consistency, volume and speed in that order. The bulk of our training is relatively low intensity with a small amount of speed work added as the aerobic base builds. The club offers two training streams: a Lifestyle stream aimed at people whose primary interest in triathlon racing is health, fitness, and having a group to train with; and the Competition stream, which is intended for those who are more interested in performance and are able to commit more time and effort in pursuit of their goals.