The team’s Board of Directors consists of President, Vice-President, Treasurer and Secretary, plus three Members-at-Large.

Kate has been a member of Triple Threat since 2006 and competing in triathlons since 1998.  Husband Tom competed in tri for a few years, and cheering on the sidelines with two toddlers, she thought “I bet can do this too!”   She started with Sprint distance and worked her way up to Olympic distance, 70.3 half ironman, and has completed one Iron-distance triathlon in Penticton, BC.  Kate started life as a runner in high school and hasn’t stopped running!

It has been said that some people prefer to train and some people prefer to race, Kate loves both and enjoys the camaraderie with teammates and the tri community in general.  Over the years Kate has held various positions on the Exec and has been Race Director of the Triple Threat Tri at Birds Hill a few times.

Kate has proudly represented Canada at Age Group Worlds in London, England in 2013, in Penticton, BC in 2017, and looks forward to competing in Montreal in 2022.

Nicole joined Triple Threat in 2018 on a bit of a whim. She was looking to improve her fitness, try something new and challenging, and meet new people. Triple Threat has been a perfect fit! She loves the training, achieving personal goals, racing, and socializing with team members. With expert and supportive coaching from Coach Tom, Nicole has moved from “I just want to finish” to “I want to do much better at my next race!” The triathlon community is full of happy, positive, and supportive people and they are all so inspiring! How can you not fall in love with it?

In her first year of triathlon, she did two races. In her second year, sh 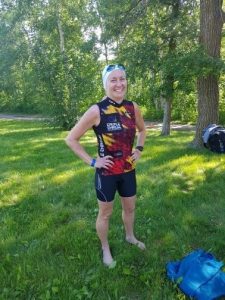 e did almost all of the Manitoba races. Nicole races in Sprint distance and trained for Olympic distance during the pandemic. She will be joining teammates on Team Canada for a Sprint distance race in Montreal in 2022. It might actually happen this time!